I am excited to announce a new activity for Conservative Party of Canada members in Hastings-Lennox & Addington – the Blue Book Club.

Participants will join every three months in a group discussion with other Conservatives that is centred around a book which the Book Selection Committee has chosen. We hope to include a mix of fiction and non-fiction, but always selecting titles that are noteworthy and of interest to Conservatives. The discussion will be led by a host from the riding association.

Our first meeting will be held on Saturday February 26 at 3:00 pm, via Zoom. In the future, we hope to be able to meet in person and combine the discussion with a social event.

This month’s book selection is Empty Planet – the Shock of Population Decline, by John Ibbitson, Globe and Mail columnist,  and Darrell Bricker, CEO of polling firm Ipsos Public Affairs.  The publisher’s description of the book says:

From the authors of the bestselling The Big Shift, a provocative argument that the global population will soon begin to decline, dramatically reshaping the social, political, and economic landscape.

For half a century, statisticians, pundits, and politicians have warned that a burgeoning planetary population will soon overwhelm the earth's resources. But a growing number of experts are sounding a different kind of alarm. Rather than growing exponentially, they argue, the global population is headed for a steep decline.

Throughout history, depopulation was the product of catastrophe: ice ages, plagues, the collapse of civilizations. This time, however, we're thinning ourselves deliberately, by choosing to have fewer babies than we need to replace ourselves. In much of the developed and developing world, that decline is already underway, as urbanization, women's empowerment, and waning religiosity lead to smaller and smaller families. In Empty Planet, Ibbitson and Bricker travel from South Florida to Sao Paulo, Seoul to Nairobi, Brussels to Delhi to Beijing, drawing on a wealth of research and firsthand reporting to illustrate the dramatic consequences of this population decline--and to show us why the rest of the developing world will soon join in.

They find that a smaller global population will bring with it a number of benefits: fewer workers will command higher wages; good jobs will prompt innovation; the environment will improve; the risk of famine will wane; and falling birthrates in the developing world will bring greater affluence and autonomy for women. But enormous disruption lies ahead, too. We can already see the effects in Europe and parts of Asia, as aging populations and worker shortages weaken the economy and impose crippling demands on healthcare and social security. The United States is well-positioned to successfully navigate these coming demographic shifts--that is, unless growing isolationism and anti-immigrant backlash lead us to close ourselves off just as openness becomes more critical to our survival than ever before.

Rigorously researched and deeply compelling, Empty Planet offers a vision of a future that we can no longer prevent--but one that we can shape, if we choose. 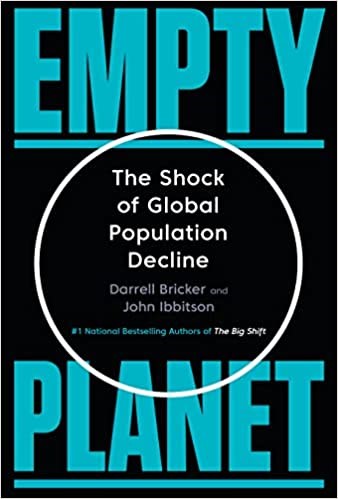 The topics raised in this compelling book have profound policy implications for all governments worldwide, and Conservatives should be prepared for the demographic challenges they present.

The book is available from Amazon here .

and at Chapters-Indigo here .

We’ve been advised that it is currently available at the Belleville Chapters in hardcover for $10.

This month’s Blue Book Club is a joint venture with our friends in the Peterborough-Kawartha Conservative Association. Please RSVP at the link and we will send you the Zoom link.

I hope you can join us,